2012 Outdoor Gear Swap at the SOCC

Winter came early! As you dig out winter gear, please keep in mind the Seldovia Recreational Service Area, in conjunction with SVT’s Prevention Program, will host an Outdoor Gear Swap at the Sea Otter Community Center on Saturday, November 17th from 11-3 pm.  This is a great opportunity to sell outdoor recreation items you no longer use . . . and perhaps pick up something you’ve always wanted! Downsize – clean out those closets – and pass around some quality outdoor gear to other Seldovians.

How will the gear swap work? Box up items you’d like to sell, name your price for each item, and then drop it off at the SOCC Friday before the swap. Volunteers will take care of the rest. You can collect your money (and unsold items) by 4:00 pm on Saturday – or you can choose to donate proceeds to the entity of your choice.

A chili and cornbread lunch will also be served during the Swap, with proceeds benefiting the Good Vibes program. Come back Saturday night for a FREE ski movie and $2 ice-cream cones.

by Annie Drury – For Alaska Communications

Alaska Communications announced the 2012 Summer of Heroes honorees yesterday at the Alaska State Fair. The Summer of Heroes program is a partnership between Alaska Communications and Boys & Girls Clubs – Alaska to honor Alaskan youth who are making a difference in their communities.  Each of the six heroes, five from the general program and one from the employee program, received a $1,500 scholarship.   This year’s recipients included Keefer Brown, a Wasilla youth who spends his summers in Seldovia.

Passionate about marine biology and paleontology, Keefer Brown hopes to someday follow in the steps of his hero, the famous aquatic explorer Jacque Cousteau, and learn how to protect the Alaska coastline.

Keefer first fell in love with Alaska’s harbor seals during an overnight school trip to the Alaska Sea Life Center (ASLC). There he learned about their playful nature and began to connect with these friendly sea creatures on a deeper level. Keefer decided to raise $50 so he could adopt and protect a harbor seal for the center’s SeaStar program.

All summer Keefer tirelessly hunted for shells and found objects along the Seldovia beaches near his grandparents’ cabin to decorate and sell beautiful candles.  Word spread of his efforts to help the seals, and soon his fundraising topped $2,300.  With this donation designated to support the sea animal rescue program, Keefer got to name the first seal pup born at the ASLC.

He dubbed her Kordelia, which means “jewel of the sea.”   These days Keefer continues to sell candles to raise money to support the ASLC’s rehabilitation and care of sea animals.  He is also a Boy Scout and participates on the Science Olympiad team at Deland Middle School.

Keefer observes that people are often surprised someone so young would be interested in protecting the marine environment, but volunteering in the community just makes sense to him. He doesn’t think of himself as a hero, and says he’s “doing what he can” and he “just wants to help.”

Thanks to Krystal Waterbury for donating this beautiful quilt for the Booster Club Auction tomorrow night!  There are many great items to bid on – from art to dolls, crafts and gadgets, even garden plants ready to enjoy!

Come Saturday night at the school and support our students as they work to raise funds for sports and academic travel!  We couldn’t do it without you! 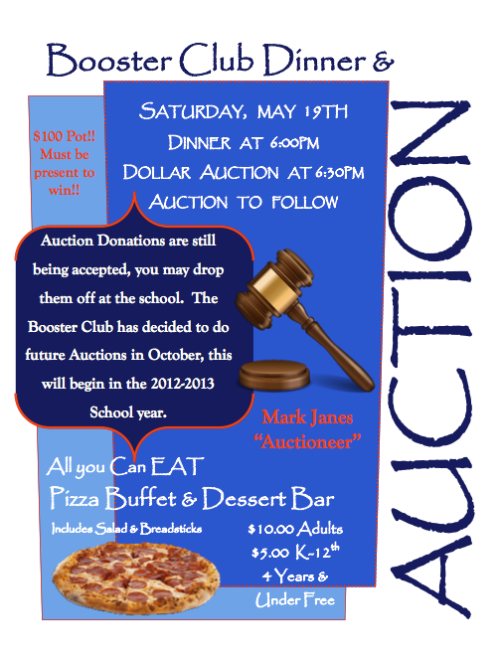